An MBE rounds off what has been an amazing year for sponsored rider Sophie Wells. The paralympic rider sponsored by Asmar Equestrian has been honoured by the Queen in the New Year’s Honours list after Sophie contributed hugely to the success of Equestrian sport at London 2012.

The grade IV rider gained individual silver on  Dr Jackie and Dr Neil Walker’s horse Pinocchio in both the freestyle and individual tests which are approximately equal to the complexity of a Prix St George level test. Sophie also won her team test contributing her high score to the overall Team Gold placing.

Nottinghamshire based Sophie Wells is not just your average rider, from a non horsey background Sophie has managed the rare condition; Amniotic Band Syndrome, alongside riding, which affects blood flow, development and movement to achieve success at National, European and now Olympic level.

Modest and humble as ever Sophie said “I’m so proud to say that I have been awarded an MBE!!! It’s so exciting and I can’t believe it! I definitely think this honour should be shared with my amazing horse Pinocchio and my fantastic coach, Angela Weiss.” about receiving the honour.

Supplying Sophie with the finest equestrian clothing Asmar is available online at http://www.asmarequestrian.com and from a selection of  retailers. Asmar Equestrian designs a range of quality, stylish riding apparel suitable for day-to-day and the show ring. The entire range incorporates classic beauty, fashion and optimum functionality for riders who deserve the best.

Warm Up With Asmar Equestrian

There is nothing like dreaming of summer during the winter months whilst we are battling with blustery winds, regular downpours and chilly frozen mornings. We at Asmar Equestrian can’t make it summer for you but we can help you stay warm and dry during the colder months.

The Longsleeve T- Mockneck and the  Women’s AE Logo Longsleeve T provide perfect base layers to wear under the rest of your equestrian attire for extra warmth without the need for bulky layers. Perfect for layering the streamline tops from Asmar Equestrian provide a stylish way to look chic whilst keeping warm.

The stretchy, flexible fabric allows you to move whether on the yard or whilst working and the clever technological design includes a Chitosante treatment which allows the garments to be absorbent, breathable, durable, fast-drying, static-free, wrinkle and pill resistant.

Priced at $60.00 the Longsleeve T- Mockneck and the  Women’s AE Logo Longsleeve T are available direct from the website by visiting

The All Weather Rider Jacket for Christmas

So you’ve decided what you would like for Christmas.

Are hints enough? Or do you have to be a bit more obvious?

The All Weather Rider Jacket is the perfect Christmas present, if we say so ourselves!

Our popular award winning coat transforms to keep you and most saddles dry in all weather conditions.

All that’s left is to leave suitable hints around the home…let us know how you do it!!

Shhhh…here’s a secret scoop on our breeches

Our breeches are coming very soon, in the meantime have a look at some of their features –

We have overstocked on a few products, so we are offering 40% off on selected items.

Wide waistband and popular boot cut provides a comfortable, natural fit with plenty of coverage while bending and stretching.

Features Chitosante treatment, which wicks away moisture and allows the garment to be absorbent, breathable, durable, fast-drying, static-free, wrinkle and pill resistant.

Available in a range of colours and sizes. Order yours today! Click here

The Eazy Fit Newsboy Cap is available in Brown Plaid and is fashionable as well as functional. Although traditionally a men’s cap, the Eazy Fit Newsboy Cap has become popular among women and top fashion houses. This cap helps to create the ultimate stylish touch, even if you are feeling slightly dishevelled inside!

We have overstocked on a few products, so we are offering 40% off on selected items.

Contains Chitosante treatment that wicks away moisture and allows the garment to be absorbent, breathable, durable, fast-drying, static-free, wrinkle and pill resistant.

Available in a range of colours and sizes. Order today! Click here 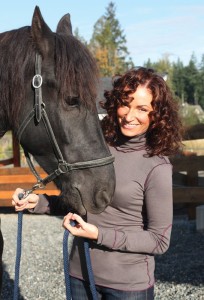 Bamboo is a Chinese symbol for longevity because of its durability, strength, flexibility and resilience. Bamboo can survive through the harshest of conditions and stays strong no matter what Mother Nature may throw at us.

When most of our days are spent outdoors or in the saddle, wouldn’t it be great to have a top that could withstand the demand and pressure we expect to face?

Our new Eco-Chic Turtlenecks embodies the power of bamboo. These new limited edition tops are made from a soft, stretchy luxurious bamboo/cotton/spandex blend. Ideal for any condition.

They have extra long sleeves, which can be rolled up or left down to keep your hands cozy and warm.

Available in Black, French Vanilla (cream), Cabernet (Burgundy), Aubergine (deep purple) and Shades of Grey (Charcoal) all with a beautiful contrast stitching on the seams and elbow patches.

The Award Winning All Weather Rider

The popular award winning coat that transforms to keep you and most saddles dry in all weather conditions.

Front and back skirt unveil behind a hidden zipper gusset to fit over your saddle.

When the skirts are not in use, they snap elegantly into place.

A truly functionable garment for any outdoor enthusiast.

3M Reflective safety piping at back.

Zippered chest and side pockets for cell phone or personal items.

Inside ribbed sleeve cuff to prevent hay and weather elements from entering.